Home CATS Can Cats and Dogs Be Friends?

What is the natural relationship? 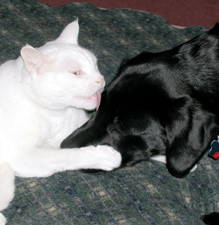 This saying reflects the commonly held belief that dogs and cats just can’t get along because they are natural enemies.

People who share their homes with both species, or who have read The Incredible Journey, know that this is not true.

Dogs and cats can form fast friendships. It is life experiences with members of the other species, and not an inborn animosity, that determines how cats and dogs feel about each other.

The initial meeting sets the stage for future considerations in the dog/cat relationship.

Both species communicate with body language and, because they “speak” differently, misinterpretations may start the relationship on the right or wrong paw, depending on who says what to whom!

Personality types and their tails

It is life experiences with members of the other species, and not an inborn animosity, that determines how cats and dogs feel about each other.

A confident, pushy dog will approach another with tail held high. This “go ahead, make my day” type of challenge is most often met with submission and/or appeasement from the other dog, unless the other dog rises to the challenge and presents a confrontational stance himself.

A friendly, confident cat will approach with tail held high, also. This cat is saying “Hey, let’s be friends.”

Consider the situation when the confident, friendly cat marches up to the easygoing or submissive dog, tail flying high, head in the air, and with a confident step.

The dog, not wanting any trouble, offers a polite greeting or backs off to see what the cat wants to do next.

Either response is reinforcing for the cat; he learns that this approach to a dog works well.

This type of cat will make friends easily with most dogs, because dogs misinterpret the friendly tail flag and are careful not to cause offense on the first meeting. 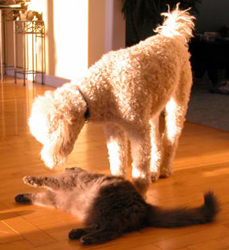 We have a dog-loving cat that uses this technique with any and all dogs. He even goes out onto the road to accost strange dogs walking by.

The dogs are so taken aback that never once has our cat been chased. A visit from our neighbor’s Great Dane was cut short when the cat marched up to say hello and the very timid neighbor-dog ran home at top speed with her tail between her legs.

It is not so much a matter of size, but more a matter of how you walk the walk and talk the talk in the animal world.

On the other hand, the rare dog that does seek confrontation may react to the friendly cat by escalating the challenge. He may put his paw or chin on the cat’s back or stand very tall and growl at the cat.

This will frighten the cat, and the cat will run away or stand and fight. Either way, this dog will have an entirely different impression of cats than the dog who just wants to get along.

An innocent puppy’s misinterpretation of the tail wag can result in a lot of hissing and a bloody nose.

Tail talk can cause inter-species confusion in another way, since dogs generally wag their tails as a sign of happiness and willingness to play or interact. The harder the wag, the happier the dog.

The cat, on the other hand, does not wag his tail, he “switches” it.

The faster the switching, the angrier the cat. An innocent puppy’s misinterpretation of the tail wag can result in a lot of hissing and a bloody nose.

Dazed and confused, the puppy will not see cats as potential friends or playmates.

An adult dog may even become enraged or excited by the attack, and retaliate, reinforcing the cat’s view of dogs as maddening oafs, and dangerous to boot.

A last major difference in dog- versus cat-speak is when they roll over. Dogs roll over to show submission; puppies are especially likely to do this.

“Please don’t kill me, I’m a baby.” Cats, on the other hand roll over to take on a defensive position.

Fighting cats do the most damage with their rear claws, and it is the cat on its back that is dominating the fight.

Pity the hapless pup who sticks his nose in for a sniff of a cat going belly up. 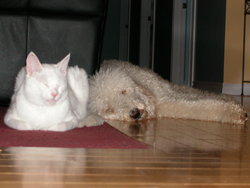 Even though they differ in some major areas, there are other areas where cats and dogs are similar.

Displacement behaviors such as grooming, yawning, lip licking, and sniffing the ground are exhibited by both species in response to feelings of conflict.

A fierce show of teeth and fluffing out of fur has the same meaning for both species. Hissing and growling seem to be universal signs of warning that even the smallest kittens and puppies know how to produce and interpret instinctively.

Cats and dogs living in the same household generally figure out a way to get along; they learn about the other through experimentation and observation.

In the cat’s case, observation from on high is the preferred approach. A dog and a cat may develop a close friendship, sharing a bed, eating each other’s food, and playing together, or they may develop a grudging respect and just stay out of each other’s way.

They learn about the other through experimentation and observation.

How can humans help?

Pet owners can help to enhance the relationship through classical conditioning. Put the dog in a wire crate with a delicious bone, and feed the cat in closer and closer proximity to the caged dog. This will help them associate each other with the good feelings that accompany eating.

Clicker training is another effective way to help the dog and cat learn to be civil and, eventually, friendly to each other. Clicker training the cat and dog separately and then moving to joint sessions (with the cat on the counter or otherwise separated from the dog) is a good way to start.

Teach each animal some easy behaviors, such as touching a nose to a target, sit, or shake a paw.

Practice in various locations around the house so that the animal is happy to play the game anywhere. If the cat and dog will tolerate being in close proximity, train them together. Ask one of them for a behavior, click and treat. They will figure out whose turn it is!

If the cat and dog are suspicious of each other, devise a way for them to be separated yet still able to see each other.

Click and treat for any behavior that is even the tiniest bit tolerant or friendly—or for any attention to you in the presence of the other.

In turn, give each animal a long-lasting treat, something that takes a few minutes to finish, to give you time to work with the other one.

Raise your criteria in small increments, keeping it easy for them to win. For example, click the cat for looking at you rather than glaring at the dog, or for putting her ears forward rather than laying them sideways.

Gradually move from basic tolerance to offering you attention, and then to responding to cues they have already learned.

If you have a helper, each of you can train an animal at the same time, gradually moving closer together.

With some instructive inter-species experience, patience, and timely clicker training, cats and dogs often become loyal “siblings,” supporting and defending all members of the family into old age.

Cats breeding with siblings : All you need to know

Where to find cat breeder